If you’re a regular reader of this blog, it should come as no surprise that I’ve been unhappy with the state of gluten free bread in Germany for many years.  Yes, technically, the bread you can buy now is much much better than what you could buy six years ago.  But, saying that, I have also become desensitised to how bad the gluten free bread is here and I have lowered my standards a little to accept it.  All of this unhappiness is due to the fact that I have sampled very good gluten free bread back in the UK and in other countries.  I know how good a gluten-less life could be like and, in comparison, how bad it is here.

Thankfully though, the lovely lovely people at Genius Gluten Free have decided to save us all and launch their products here in Germany.  Now, some of you (probably the British amongst my readers) will have just experienced their head exploding with joy.  For the rest of you unfamiliar with Genius, they produce perhaps the best gluten free bread you can buy in a supermarket, anywhere.  Now, this is quite a statement and I’ve not tried every single bread in the world, but there is such a difference between the Schaer and Schnitzers of the world and Genius, I feel pretty comfortable saying it.

First off, and most importantly, they make fresh bread.  There is no three month shelf life in sight here, no long list of chemicals pumped into the bread to make it last forever to satiate those nervous store owners.  As a result it’s pretty healthy (well, as much as gluten free bread can be) and tastes roughly a million times better.  Who knew that making a bread to have a good taste, texture and be eaten fresh would be good? (oh, only all those gluten tolerant people who get to do it every day)

If you’re thinking “Oh, I’ve tried all that gluten free bread before, it’s terrible.  I’ve given up completely on bread and I’m not going to bother with another one.”.  Give it a chance.  Buy a loaf or two and some rolls.  You will be happier.

At the moment they’re only launching a limited selection of their products and, for now (see more below), they’re available on foodoase.de here :

I was fortunate enough to meet up with the owner Lucinda and their German Genius team a little while ago and just look at the bounty they provided me :

Four types of loaves, muffins and buns!  Happiness.  Plus, they gave me a little deeper knowledge into the company and what it is they’re trying to do.  Basically to make life normal for us, to make us feel like we don’t just have to ‘make do’ with bad gluten free products.  How many times have you bought a packaged loaf from some biomarkt that was probably baked a month ago and had to reactivate it with grilling or some such just to make it taste passable?  Other people don’t have to do this, so why should we?

But, I know you really want to hear about the actual bread.  So, the first thing I had to try was the white rolls.  The easiest way to put this is that rolls like these are simply not available here in Germany.  You can buy ‘rolls’ here but they’re more akin to a solid lump of stone that has never even heard of the concept of air. 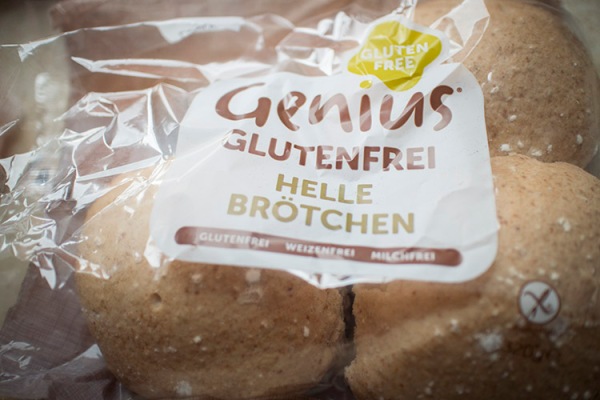 Yes, they are every bit as amazing as they look.  Soft, delicious and very close to ‘real’ bread.  You simply have to try them to believe how good they are.  Plus they have a seeded version (they are equally as good, although this photo was taken a few days later when they were a little less fresh, hence the slight crumble).

Then, of course, I had to wash down the rolls with a muffin.  Just look at it.

Lemon and poppy seed.  It was easily better than any muffin I’ve had here, even those ‘freshly baked’ ones that are available in cafes.

Then there is the fruit bread.  Another one of these products you cannot buy here and it is simply delicious. 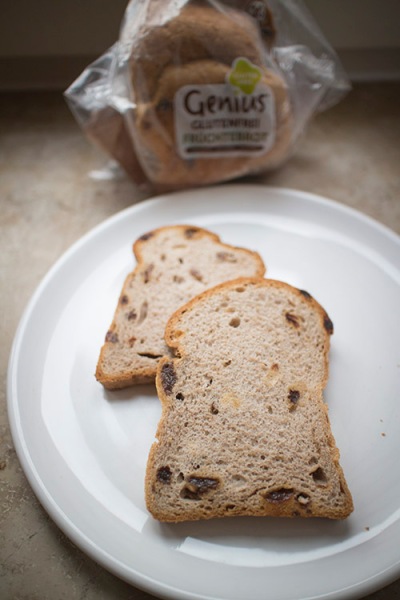 There are other loaves, a couple of darker ones and a white, but for now I’ll leave you with the tease of the ones above.  The reason for this is that they will soon start selling genius in a few select Kaisers!!!  YES!!!  Actually just being able to walk to the shop and buy some on a whim!!!  It will be a trial to see how well the breads sell, so we’ll all have to go and buy lots and lots to convince them to stock Genius forever!  I’ll post up part two of my review then as a little reminder.  Although, if you can’t wait, be sure to check out Sole Satisfaction for her own review (and amazing photos) of all the genius breads here.

The list of Kaisers for the trial is as follows :

Are you looking to join others when out gluten free dining? Why not join the Berlin Gluten Free Dining Club and join for the next meetup!